Return to the sea of a Caouanne turtle at Le Trayas

Last January, a small turtle was accidentally caught at a depth of about ten metres, not far from Nice airport. After being welcomed and cared for at the Centre de Réhabilitation de la Faune Sauvage (CRFS), it was released at the Cap Roux cantonment area this morning !

The loggerhead turtle : a common but vulnerable species !

This species of sea turtle, also known as the loggerhead turtle, is common in the seas and oceans of the world. It is recognizable by the size of its head, the shape of its beak and the number of scales present on its shell. This species, which can measure from 90 cm to 1.20 meter, is classified as vulnerable. It plays an important role in the regulation of jellyfish, which can swallow up to several hundred jellyfish a day. 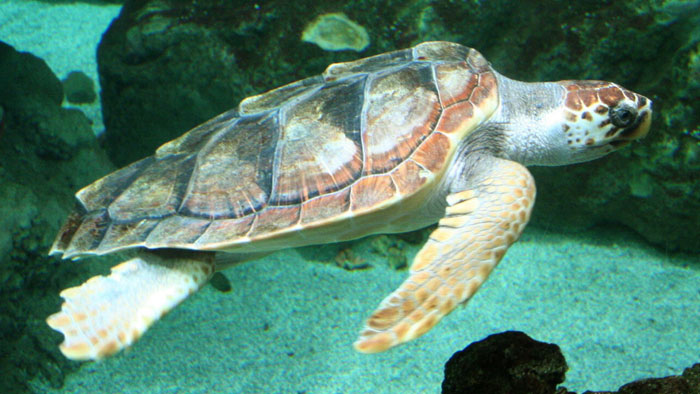 Accidentally trapped during a longline fishery

Calangria fishing is characterized by a mother line with hooks attached to it. Unfortunately, the turtle bit into one of them and became trapped.
Immediately notified by the professional fisherman, the team from the Centre de Réhabilitation de la Faune Sauvage (CRFS) came to take charge of the animal and proceeded to remove the hook.

His story could have ended here but the turtle had an abnormally low body temperature (12°) and could suffer from hypothermia. The teams therefore gradually raised the turtle’s body temperature and performed the usual tests to check his general health and detect any medical problems.

A control x-ray revealed the presence of several pieces of plastic in the turtle’s digestive system. The members of the association therefore waited for the turtle to excrete this waste and regain perfect health before putting it back into the sea.

This Thursday 05 March, the little turtle, baptized Lily, was put back into the sea. On this occasion, we were able to go on site and watch the launching of Lily. A very moving spectacle which reminds us, however, of the need to work daily for the protection of marine species and the environment in general…

Watch the full video of the launch on our Facebook page !

We were there to film the event ! View the full video by clicking on the link below :

At the end of this study, Ifremer published a guide to good practice for handling and releasing accidentally captured animals, thus considerably reducing their mortality.

Four turtles are currently in care and 7 have already returned to the sea since the opening of the center.

What to do if a marine animal in distress is discovered ?