Culture in open air in Fréjus during summer

In Fréjus, summer means art and freedom! Enjoy with your family the joys of film, music and theatre with your head in the stars.

A summer of art and heritage!

What could be better than discovering the heritage sites of Fréjus this summer while having fun? This summer 33 dates complete this calendar of artistic events with exhibitions at the Villa Aurélienne, music, jazz and theatre in the Parc Aurélien and open-air cinema at the Théâtre romain (roman theatre). From Tuesday the 18th of June to Wednesday the 28th of August, the program certainly hides some little gems that you and your little ones will like!

Music in open air : let’s meet at the Villa Aurélienne

For the second consecutive year, the Ad Libitum orchestra is offering 4 evenings of contemporary and classical music in the Aurélien park. For adults Mozart, Fauré, Vivaldi, Offenbach or Daft Punk will relax you, each in their own way… Of course, there is something for all tastes and for all ages because some evenings will be dedicated to the youngest audience with music concerts from Disney movies (you too can already hear the “Let it go, let it go” of your little blond heads humming all evening long?).

The price is 5€ for adults with free admission for those under 18 years old (ticket office on site).

Wednesday the 26th of June : “A rebours”

Wednesday the 3rd of July : “Gaieté de choeur” with the choir Esterelanco

Friday the 5th of July : “Hakuna Matata” for children and teenagers.

Open-air cinema at the Roman theatre

Don’t you think that hot summer nights are not the right time to watch a little movie locked in a cinema? We have the solution! Let yourself be tempted by a small open-air family session in the arenas of Fréjus, between heritage, 7th art and let go! 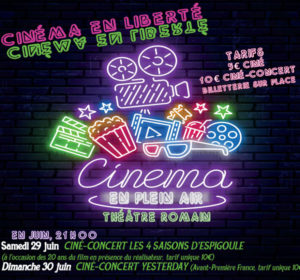 A programme of 15 movies for the whole family will punctuate the city’s evenings, with comedies, cartoons, action movies but also this year 3 cinema concerts with Bohemian Rhapsody, “Les 4 saisons d’Espigoule” in homage to his 20th birthday but also a preview showing in France “Yesterday”, Danny Boyle’s film about the Beatles.

The price is 5€ for film show and 10€ for cine-concerts (ticket office on site).

From August 23rd to October 13th, the french artist Nicolas Laverenne‘s work is exposed to Port Fréjus and submitted by the Jas de La Rimade art gallery.  The bronzes sculptures fills this place in an interesting balancing game ! Walk along this amazing route of art wich as been acclaimed by international critics.

55k Facebook fans: we celebrate it with a giant 55 in paddle & kayak